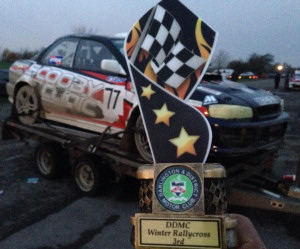 The 2014 race season is over with the SCR Race, Drag and Gymkhana cars all getting great results!

Mikee in the SCR drag car broke a personal best and got the world record
as the fastest manual shift 4 cylinder Subaru in the world with an 8.83
¼ mile and a terminal speed of 160 MPH

Wayne Ward, one of our pro drivers won the “Kieth Pattison memorial
sprint” in his SCR built and sponsored race car.

Back to Dimitrij in the Gymkhana car and the “monster energy gymkhana
challenge” was taken by the SCR built and sponsored type R designed to
go sideways at speed.

Just when we were about to take a rest from competition Dimitij pops up
with an invite to croft for rally cross event this coming Sunday 16th
November, reviving an old time attack car in time for the event, here we
go again …

After a 12.30 AM finish Saturday the car, held together with tie wraps
and gaffer tape went off to Croft to see what rally X was all about.

A short nap ans as soon as day broke more work carried out on the old ex
time attack cars electrics was required.

It got through scrutineering and off it went to race piloted by the ever
resourceful Dimitrij, who had no sleep at all since Friday.

First time out in Rally X and a very well deserved 3rd place with a
little trophy.